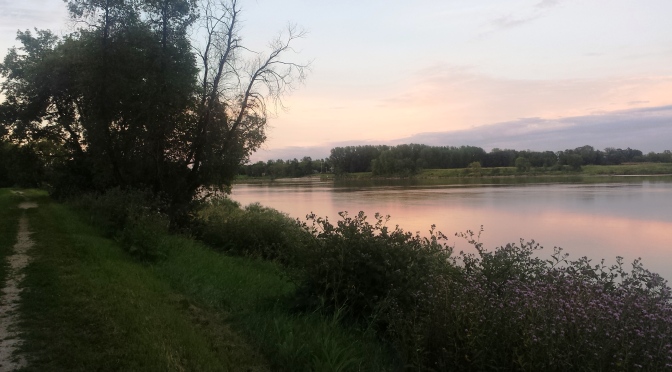 Climate change is already having an impact in Canada, and all indications from existing global research suggests these impacts will continue. While some of the changes from human caused global warming will have positive effects (such as longer growing seasons and milder winters), many impacts will be negative, creating health, environment, and economic risks.

In Canada, the most prominent negative impacts will likely be the following:

We also know that for the next several decades, we are ‘locked in’ to at least some change. No-matter how much we reduce greenhouse gas emissions, our planet will continue warming until at least the 2070s.

So, if we are confident that changes are coming, and we know some of them will be bad, what should we do?

Preparing society for these changes is called climate change adaptation. Political scientists, psychologists, economists, anthropologists, and geographers (like me) are studying how societies (from individuals, to cities, to continents) are undergoing this process (not to mention all the brilliant scientists and engineers studying the physical side of the problem).

Us social scientists have repeatedly come to a similar conclusion: adapting to climate change is politically, and culturally, complex.

Well let’s take Canada, and the problem of increased extreme rainfall events; such as in Calgary in June 2013 and Toronto in July of the same year. As the 2013 flooding showed, these cities’ existing infrastructure (storm sewers, drainage pathways, road heights, permeable surfaces) are built, like all Canadian cities, to handle a historical climate that no-longer exists. So, how do you prepare a city like Toronto for ongoing and expected changes?

Making necessary changes to road networks, highways, public transportation, building standards, and property management (among others) is a hefty challenge that requires the involvement of a lot of key players. When organizations such as cities, provinces, the Federal Government, private businesses, local neighbourhood groups, researchers, non-governmental organizations, and others, come together, they are doing so in an attempt to govern the issue. Governance is how a society addresses a particular issue, the term takes into account that governments are not the only players in the modern policy world, and that change occurs through complex ‘modes of governance’.

Te modes of governance are often complex bundles of actor relationships and policy tools. Why? Well lets take the City of Toronto again. The city must recognize that its infrastructure is tied to the sewers, roads, public transit systems, and electrical grid of its neighbours, so, the municipalities from across the GTA will need to be involved in discussions of upgrades. Further, some of this infrastructure is provincially or federally owned and operated. Even in the case where it is not, the city may need funding from other orders of government to initiate major projects. So, now we have multiple municipalities, and all three orders of Canadian government involved. Add in the regional conservation authority responsible for water management in the GTA (unique to Ontario), and you have a fourth order of government.

Now, how do policy makers go about figure out what is need to prepare the infrastructure for climate change? What are its needs and limitations? What will users experience in the future? How will it be impacted? Here, scientists from within government as well as academia, industry and the non-profit sector will need to be consulted to gain the best possible insight into the risks posed by climate change. While a broad understanding of impacts may be present, to operationalize a plan, a city (or any government) needs a more detailed scientific analysis of its future climate impacts.

But it can’t just be governments and scientists making adaptation plans, what about the communities that use the infrastructure or services on a daily basis? Adaptation planning needs to take into consideration the interests of local communities including social, cultural, and economic needs.

So, what we have is a lot of actors necessarily being involved, and no single path forward on how to be prepared. On many issues in Canada, these actors come together and negotiate the way forward (for better or worse) in a complex political network.

For example, we, as Canadians, decided long ago that the best way to deal with public health was a national health care system with specific roles for the Federal Government, provinces, regional health authorities, and municipalities. The governance of public health in Canada also includes important roles for the public, private business, non-profit researchers, scientists, academics, and health advocates. Within the governance of any issue, there is often a complex governance network with various roles for everyone, and approaches to ‘getting things done’. These governance networks take all kinds of shapes, depending on the issue. Some are led by government (most health care issues), while others are dirven much more by market principles (many housing issues), or voluntary action. Who is most involved, what policy instruments are being used, and the desired goals of those involved typically reflect the different ‘shapes’ of governance networks. What researchers are asking now is: what about preparing for climate change, how might that be governed?

My doctoral research specifically asked the question: how does preparing for the impacts of climate change challenge existing ways of governing in Canada? What shape is adaptation governance taking, and where do people want to see it go? How do we figure out what needs to be adapted? When we do have a plan for adapting, who will do what? Who will flip the bill? Who will identify the specific risks? Who will inform the public? Who will monitor if it is working? what is the role of each level of government?  As well, How do we create necessary changes? Which kinds of policy instruments should we use? Markets? Regulations? Voluntary actions?

Through interviews and workshops with over 100 of Canada’s top climate change adaptation practitioners, we’ve been able to identify what kinds of governance practices have been occuring, what is working, what might need to change, and what will be needed for Canada to best prepare for a changing climate.

This research was been funded by the Social Sciences and Humanities Research Council and overseen by Dr. Gordon McBean and Dr. Dan Shrubsole.